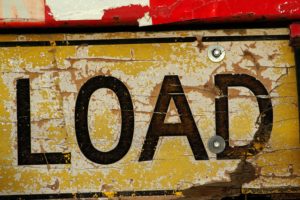 When I was a kid my mom seemed to have a saying for nearly every occasion. Maybe that’s because we were from Kentucky. I like to say that Kentucky is the only state in the Union where socks and underwear are totally optional. (Don’t worry. I have my socks!)

If mom caught me trying to carry an oversize load of dirty laundry or groceries or lawn clippings in an obvious attempt to avoid a second trip, she would call out, “Lazy man’s load! Lazy man’s load!” Inevitably I would prove her right by dropping at least part of the load.

I’ve learned Mom’s lazy man’s load lesson. Now that I am out of that part of my training, Mom is free to make the move to corporate where there are plenty of C-level execs in need of a little mothering. I say, let’s start with marketing where they seem to be determined to turn every marketing event into a lazy man’s load.

There ought to be a law that ties corporate marketing budgets to corporate hiring and training budgets. Such a law would put an end to marketing campaigns that drive good customers against poorly executed offers.

BIGresearch surveyed tens of thousands of customers on my behalf for a book titled, Why Service Stinks. Real, live customers told us that, in their mind there are four key causes of poor customer service:

Rude employees are the fruit you harvest when too little thought and too few resources are devoted to hiring the right people in the first place.
Insufficient staffing? If you don’t have enough staff on hand, are you sure you want to drive first time customers to your business?
Customers, (perhaps some of your customers), told us that too often they are served by staff who are obviously poorly trained.

That’s driving good customers into a poorly executed offer. It’s a quick but lazy way to make the register ring. It may be good for short term profits, but it’s highly detrimental to long term survivability.

The fourth cause of stinky service surprised me. Customers told us that rude customers often got what they deserved. That’s when I realized that customers aren’t always customers. When they head for work they’re pinning on a name tag and becoming servers themselves. So pay attention! They know what they know are talking about!

Every marketing campaign should include a provision for hiring and training the troops who are going to be asked to execute the offer. Anything less is a lazy man’s load!

Don’t drop the service load that comes from your marketing campaigns – or you’ll hear from my mother!